If you know anything about FIFA, you weren’t surprised by the U.S. Justice Department, FBI, and IRS’ joint indictment of nine FIFA executives and five others on bribery and other charges.

I also wasn’t surprised by these reactions, but I was still angry. These folks – not random soccer fans, but a self-professed “devotee of North American soccer” and an editor of NewYorker.com, respectively – blithely erased the inspiring and groundbreaking accomplishments of the U.S. Women’s National Team (USWNT) by saying “soccer” when they meant “men’s soccer.”

Subtle sexism like this isn’t unique to soccer, but it’s especially egregious when the USWNT has dominated the sport for decades and surpasses the U.S. Men’s National Team (USMNT) on virtually every metric. For the same reason, it’s always bothered me that @USSoccer on Twitter and Instagram ostensibly represents whole organization, but men are the default. The USWNT has its own accounts (here and here). 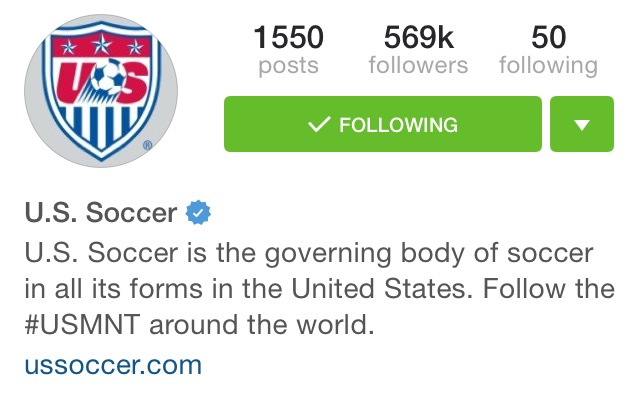 These examples may seem small, too insignificant to even mention, but they reflect a broader system that devalues women’s contributions. FIFA has continually undermined women’s soccer, to the point that the greatest team in the world is forgotten and othered.

USWNT player Alex Morgan revealed last week that Sepp Blatter, President of FIFA, didn’t recognize her in 2012 when she was being honored as one of the three greatest players in the world.

FIFA’s sexism runs deep, to the point that they refuse to provide basic accommodations for the  Women’s World Cup. This past fall, players filed a lawsuit against FIFA for gender discrimination because the 2015 World Cup in Canada will be played on turf, which changes the pace of play and is more dangerous for players. USWNT player Sydney Leroux told ESPN, “I really feel it is an equality issue. Do you think the men in Brazil this summer would have said yes, we are fine playing on turf? No way in hell that would happen with men. ”

FIFA has a long history of sexism, of excluding women and treating the women’s game as less than. Grant Wahl provides a comprehensive account of how sexism has been and still remains inherent in FIFA’s culture, and comes from the top down.

But FIFA’s treatment of women is not only wrong, it doesn’t make sense. Players across the world are demanding the resources they need to play safely, reach their fans, and grow the game – which means more money for FIFA. But the idea of supporting women players in the same way they support men is unthinkable to the men who run FIFA.

As my excitement for the World Cup has grown over the past year, so has my frustration with the institution putting it on.

So this summer, I’ll travel to Canada, and I’ll watch every USWNT game, and I’ll lend my money and my voice however I can to show FIFA that women aren’t going anywhere.

One thought on “There’s Soccer, And Then There’s Women’s Soccer”